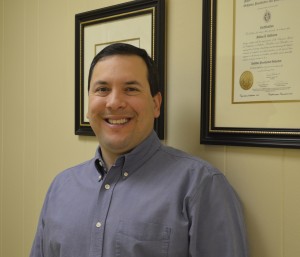 Fabian Calderon, CPO. LPO. is a graduate of the UT Southwestern medical Center orthotic and prosthetic program. He is a board certified and state licensed Orthotist and Prosthetist. Fabian is a third generation Orthotist and Prosthetist and began in the field of orthotics and prosthetics as a young teenager working at his father’s office as a technician. His father currently practices at this office which was opened by his grandfather over 55 years ago.

After graduating from UT Southwestern medical Center in 1998 he returned to El Paso in 2000 to finish his residency in orthotics and prosthetics and has remained in the area since then.

Fabian is a regular lecturer for the physical therapy program at UTEP. He has also lectured for the occupational therapy department at UTEP and the orthopedic surgery program at Texas Tech medical school.

Fabian is heavily involved in local and national organizations such as FEMAP, University medical Center foundation, LIMBS international and Shriners. The involvement with such charitable organizations has been and continues to be the core of his practice for many years.